How those mobile aerial cameras at football games work

I was just wondering about this yesterday... 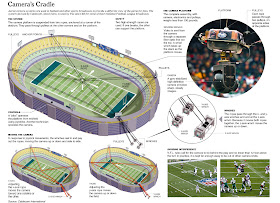 Contrary to what most of us might have thought, the cables and camera haven't interfered with the game:

The league stipulates that the cameras always be behind the play and at least 12 feet above the turf. "Only in extreme situations do any of the wires get into the path of the line of scrimmage," Mr. Maxwell said, and the systems have never interfered with a punt, kickoff or pass.

It's not that the kickers and punters haven't tried, though, at least in warm-ups. Before the game, Mr. Rodnunsky said, "we're out in the field doing our testing, and they're out doing their testing."

"I'm sure they have some sort of pool for whoever knocks the camera down," he added. So far, though, that hasn't happened. "I'm sure the prize is getting bigger," he said.